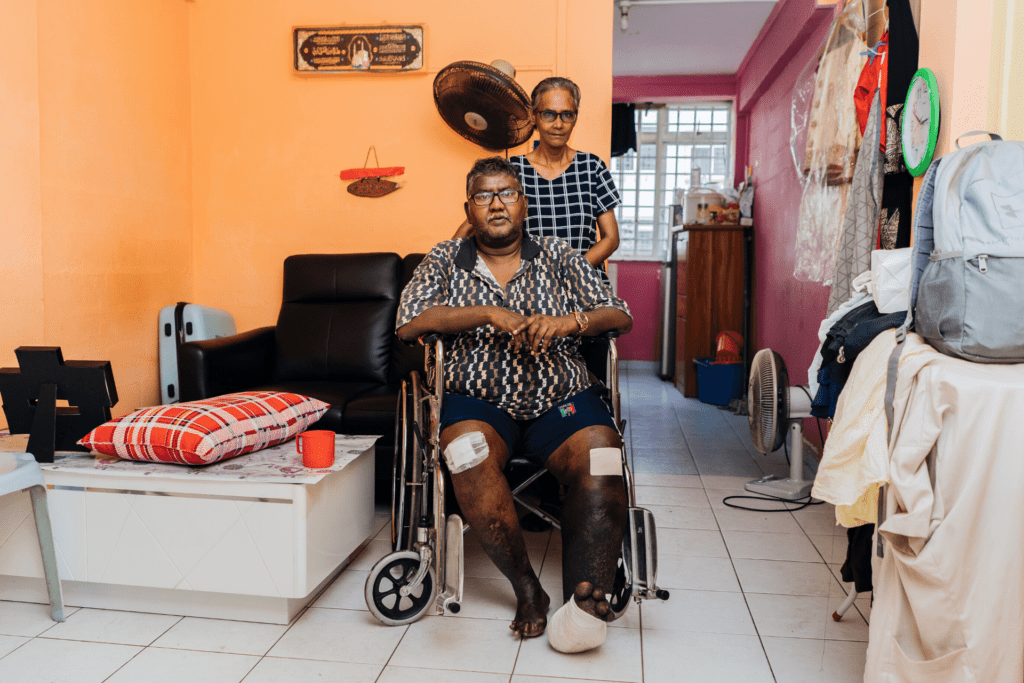 Mr Badardin and his wife, both of whom suffer from medical conditions that disallow them to work.

It has been nearly 15 years since Mr Badardin Abdul Rahim has been unemployed due to health problems.

Mr Badardin’s left leg is currently swollen and wounded, causing difficulties to walk or stand for long periods. One of the toes on his right leg has also been amputated. On top of this, the 60-year-old also suffers from cholesterol and heart problems.

This puts his wife and sole caregiver, Madam Maithin Mirah Abdul Kadir, 59 years old, needing to clean his wounds and change its dressings every morning. She too has her own set of health issues including epilepsy and had suffered a stroke attack about a decade ago.

The married couple who are incapable of working lead a simple life in a 2-room rental flat with their only daughter.

“Morning, after waking up, I will have breakfast with her (referring to his wife). We make tea, coffee, simple lah. If there is bread, we eat with egg or make dosa (thosai). Sometimes we will also go down (to the coffeeshop), she loves eating kueh.

“I can’t walk much. After my wife changes the dressing on my leg, she will also clean up the wound and then I will rest for a while,” said Mr Badardin, giving a glimpse of his daily routine.

Before suffering health problems, Mr. Badardin worked as a security officer in a hotel for nearly a decade. However, he had to stop working in 2005 due to frequent foot problems.

At that time, he was staying in a 4-room HDB flat. Unfortunately, the flat had to be sold off as he was no longer able to pay monthly bills after he stopped working.

After going through various housing challenges, he eventually moved in to a 2-room rental flat in 2011.
According to Mr Badardin, in addition to rent and bill utilities, most of the family’s expenses are apportioned for his medical needs.

Thus, he is thankful for the Zakat he receives from Muis since December 2017.

“There were people from Muis who came to my house about two years ago and asked me if I needed help. Alhamdulillah, with the help of Zakat, it has allowed me to buy the necessary dressings for my feet.

“At least, in the month of Ramadan, we get to spend a bit more,” said Mr Badardin.

In addition to Zakat assistance from Muis, he also receives monthly income from CPF.

Through the help of Zakat, Mr Badardin was also informed of various mosque programmes held at the Masjid Hajjah Rahimabi Kebun Limau, where he had participated in several mosque lectures. He was able to go to the mosque with the help of his personal mobility device (PMD).

“Sometimes, I hesitate to go to the mosque. I go there on my PMD and then there would be people who give me money although I did not ask for it; I just wanted to meet Ustaz,” said Mr Badardin.

He added that despite his condition where he could not walk, he is thankful that he is still able to go to places like Tekka market occasionally with the help of his personal mobility device.

“Alhamdulillah, the help of zakat from Muis allowed me to get medicine for my wife and I,” said Mr Badardin.

Mr Badardin currently goes for biweekly physiotherapy at a daycare centre and is able to take little steps at a time.

May Allah reward him and his family for their resilience in trying times, and may He grant health and ease to them.

Mr Badardin and wife fall in two of the categories of 8 asnaf who have rights over Zakat – asnaf fakir and miskin.